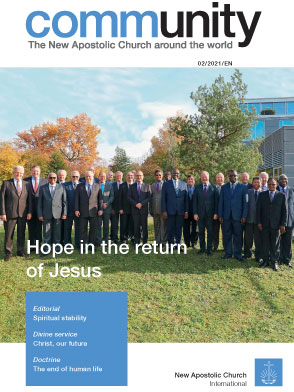 Some 1000 Christians in Myanmar believe in the doctrine of today’s Apostolate active in the New Apostolic Church for over 30 years.

Started by Canadian Missionaries the Myanmar NAC is today incorporated in the Regional church of South East Asia.

We invite you to our Divine Services at Yangon Church. Come and see and hear the word of God.

Status Update on The Subject of Women in Ministry

The ordination of women—this was the other big item on the agenda of the most recent District Apostle Meeting. What resolutions have already been passed? Which decisions remain to be made? The Chief Apostle answers these questions in the second part of our 2021 annual interview.

Chief Apostle Jean-Luc Schneider, how are the discussions going with respect to the subject of women in ministry? People are always inquiring about this. How do you answer them?

In our deliberations on this vast and multifaceted topic, we allow ourselves to be guided by four fundamental questions: “What does God say?” and “What does the Bible say?” Once we know the answers to these questions we ask: “What does our Church say?” and “What is the situation in the individual countries?” Only once we have found reasonable answers to all of these questions will we know what decision we are able to make. This is how we have always communicated the process to date.

END_OF_DOCUMENT_TOKEN_TO_BE_REPLACED

Fellowship is both the way and the goal

Training in the fellowship of the believers for our eternal fellowship with God: this is how the Chief Apostle understands salvation in Christ and our preparation for it. What this means in practice he explained in his annual interview 2021.

District Apostle Meeting, Pentecost service, and now a newly published interview: this topic is really important to Chief Apostle Jean-Luc Schneider. How does the New Apostolic Church understand salvation? And what are the implications of this for our attendance of the divine services?

END_OF_DOCUMENT_TOKEN_TO_BE_REPLACED

Your will be done

When people talk about the will of God, it is often in association with negative developments. When we are hard hit by a stroke of fate, we might say, “Oh well, it was the will of God.” When our prayers are not granted, we often think: “The things we requested in our prayer must not have been in accordance with the will of God.”

For many, the statement “Your will be done” in the Lord’s Prayer means subordinating to the will of God and having to do without something as a result. We bow before the will of God—even though we would rather have had a different outcome. END_OF_DOCUMENT_TOKEN_TO_BE_REPLACED

Allowing the Holy Spirit to Lead Us

We cannot celebrate this feast of Pentecost in a usual manner. And I must admit, last year I couldn’t imagine that we would have another, to celebrate it in this way.” The Chief Apostle began his ministry from our church in Seebach, Zurich (Switzerland) at the Pentecost service, Sunday, May 23, 2021. As a basis for his ministry, he used the passage from Romans 8:14: “For as many as are led by the Spirit of God, these are sons of God..

In Pentecost, God the Holy Spirit reveals Himself in a special way. The Apostles felt a powerful wind blow between them and tongues of fire descending upon their heads. They could speak multiple languages. Those are the signs of power. “But it lasted only in certain time. But, more and more the Holy Spirit worked … in the soul and heart of those who were baptized and sealed.” We can see parts of the signs of power within us. Another part that we cannot see: the Holy Spirit purifies us. END_OF_DOCUMENT_TOKEN_TO_BE_REPLACED

To capture the spirit of Pentecost, hundreds of thousands of members of the New Apostolic Church will be gathering this coming Sunday in one large congregation. The international Church leader, Chief Apostle Jean-Luc Schneider will be conducting the traditional central divine service in Zurich (Switzerland), which will be broadcast throughout the world.

Believers in many countries continue to be in lockdown because of COVID and are currently unable to gather in their church buildings. The divine service will therefore not only be broadcast on the Church’s own channels via satellite and the Internet, but also streamed publicly via YouTube in English, French, German, Spanish, Portuguese, Russian, Polish, and Dutch, as well in sign language. END_OF_DOCUMENT_TOKEN_TO_BE_REPLACED

…so the children of Israel also wept again and said: “Who will give us meat to eat? We remember the fish which we ate freely in Egypt, the cucumbers, the melons, the leeks, the onions, and the garlic; but now our whole being is dried up; there is nothing at all except this manna before our eyes!”

The people of Israel were travelling through the desert on their way to the Promised Land. The Israelites had lived as slaves in Egypt for 400 years (Genesis 15: 13). God, however, kept His END_OF_DOCUMENT_TOKEN_TO_BE_REPLACED

[Christ Jesus] who, being in the form of God, did not consider it robbery to be equal with God, but made Himself of no reputation, taking the form of a bondservant and coming in the likeness of men. And being found in appearance as a man, He humbled Himself and became obedient to the point of death, even the death of the cross.

The Bible text from the letter to the Philippians describes the path of the Son of God from divine glory into the world of humanity. He renounced all sovereignty and appeared as an ordinary man among the people. END_OF_DOCUMENT_TOKEN_TO_BE_REPLACED

“Blessed is the man who trusts in the Lord, and whose hope is the Lord. For he shall be like a tree planted by the waters, which spreads out its roots by the river, and will not fear when the heat comes; but its leaf will be green and will not be anxious in the year of drought, nor will cease from yielding fruit.”

The biblical text speaks of a pious man who directs his life towards God. He can be sure that God will stand by him. He is compared to a tree standing near water. In regions of the world such as Palestine, where there is little rainfall, only the tree or plant that is near a stream or river can survive so that even if it is hot and dry, they will not be damaged. END_OF_DOCUMENT_TOKEN_TO_BE_REPLACED

We live through highs and lows, sometimes filled with fear, and then filled with joy again. Our comfort is that God is faithful! He does what He says He will do. As human beings, we may not always notice this, especially since we only know a tiny part of the divine plan that He has in store for us.